U.S., Greek, Polish and Italian fighter jets are planned to deploy to Ovda Israel Air Force Base this month, to participate in the Israel Air Force’s ‘Blue Flag’ air warfare exercise over the southern Negev Desert. Over 100 aircraft and about a thousand air and ground crews are expected to participate. Israeli sources have not confirmed the specific nations taking part in the exercise but foreign sources have indicated these are likely to include Greece, Poland, Italy, the US and Israel (1, 2).

Each of these air forces have already trained separately with the IAF, and some were also deployed here for training, but the ‘Blue Flag’ will be the first opportunity for the IAF to conduct a multinational exercise of this scale, since Israel was excluded from the NATO ‘Anatolian Eagle’ exercise as a result from the deteriorating relations between Turkey and Israel in recent years. Foreign air forces have been flying the Eager Tiger and Eager Lion exercises in Jordan for several years but for the Israelis, the ‘Blue Flag’ is a first of a kind opportunity.

The exercise will employ the IAF Aggressor squadron based at Ovda, and scores of ground based targets and air defense assets positioned throughout the southern Negev, simulating a modern threat environment. While the aggressor role is similar to that of the US “Top Gun” school and ‘Red Flag’ exercises, the aggressor role is tasked on different squadrons every 24 months, thus keeping pilots combat ready and proficient in the IAF combat missions. The squadron flies F-16A Block 15 Falcons, in service with the IAF since 1980.

The IAF conducted a ‘grand rehearsal’ in January 2013, deploying five squadrons to the southern base, simulating a surge in missions and operational tempo conducted over several days. For the actual exercise the visiting air forces will deploy to Ovda on November 13, for orientation and preparation, with the exercise itself staged between 17 and 28 November. 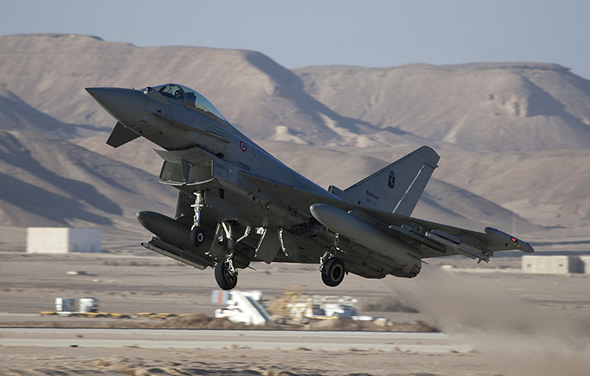 Patriots and F-16s Deployment to Jordan: A beachead or…

Fifth round of UK-Israel Strategic Dialogue held in Jerusalem

Speaking after the talks Simon Fraser said:“The UK and Israel are close partners. The Strategic Dialogue is central to maintaining and strengthening that relationship. It provides an annual forum to discuss important issues with our Israeli friends and counterparts. "We discussed a wide range of bilateral, regional and global issues.

We reaffirmed our common determination to prevent Iran from developing a nuclear weapon. The UK firmly believes that the best way to achieve this is through a negotiated settlement that addresses the international community’s security concerns about Iran’s nuclear programme.

As the Foreign Secretary has said, we believe there is an opportunity now to reach a first step agreement with Iran and we must make sure this opportunity is not lost. This is the goal of the next E3+3 meeting with Iran in Geneva this week."We also discussed the Middle East Peace Process where the UK urged Israel to take advantage of the opportunity that the current talks presented -- to achieve the goal of a secure and universally recognised Israel living alongside a sovereign and viable Palestinian state."We agreed a number of steps to strengthen further the thriving UK-Israel partnership in fields including trade, culture, universities, technology, energy and e-Government. We also agreed to expand our exciting scientific collaboration through launching a series of UK-Israel Science Years.”

Israel to set up medical facility in the Philippines

An advanced multi-department medical facility, equipped with approximately 100 tons of humanitarian and medical supplies from Israel, will be rapidly established in the city of Daanbantayan to provide medical care for disaster casualties.President Peres: "We hope that the aid provided by the State of Israel will help ease the suffering of the people of the Philippines."

Israel advance assessment team arrives in Tacloban, Philippines
An Israeli delegation of experts in the fields of search, rescue and medicine left on Sunday night (10 November) for the Philippines, which was struck by a natural disaster earlier today. The rescuers are part of the IDF’s Home Front Command.A six-member advance team – four people from the IDF Home Front Command and two from the Foreign Ministry – will evaluate what is needed on the ground before Israel sends a larger mission. The team landed in Manila at 20:00 local time and will depart for Tacloban, where they will  perform a thorough situation assessment, including an infrastructure evaluation, that will determine the best rapid response Israel can provide to the government and people of the Philippines.

Israel advance assessment team arrives in the PhilippinesCopyright: MFAUpdate:A 147 member delegation is set to leave for the Philippines on Wednesday, November 13, 2013, in order to provide search, rescue, and medical services. Following assessment, it was decided to locate the medical facility in Daanbantayan, in the northern province of Cebu, which suffered the greatest damage after Tacloban.An advanced multi-department medical facility, equipped with approximately 100 tons of humanitarian and medical supplies from Israel, will be rapidly established to provide medical care for disaster casualties, operated by IDF doctors, nurses, paramedics, pharmacists, mental health professionals, x-ray technician, and lab workers.The delegation comprises members of the National Search and Rescue Unit of the Home Front Command headed by the unit commander, Colonel Ramtin Sabti, as well as senior doctors in the IDF Medical Corps, headed by the Vice Surgeon General of the IDF Medical Corps, Colonel Doctor Dudu Dagan.

IDF delegation to the Philippines at Ben Gurion AirportCopyright: IDF SpokespersonVideo: Senior officials from Israel's Ministry of Foreign Affairs and Israel Defense Forces are in the area surveying the damage. An aerial shot gives a view of the current state of the area.
President Shimon Peres wrote to Philippine President BenignoAquino:"Your Excellency,In my name and on behalf of the people of Israel, I wish to extend out deepest condolences to the people of the Philippines affected by the shocking devastation in the trail of Typhoon Haiyan. Our hearts go out to the families who have lost their loved ones in this terrible natural disaster, and our prayers are with you and your people in this time of mourning and hardship.We are following with much concern the horrifying effects of the storm and hope that the aid provided by the State of Israel will help ease the suffering of the people of the Philippines.From Jerusalem, we wish you strength and fortitude."Prime Minister Netanyahu also sent a letter to President Aquino:"On behalf of the government and people of Israel, I extend heartfeldt condolences to the families of those who lost their lives as a result of the horrific typhoon, and I send best wishes for a speedy recovery to those who were injured.I hope that Israel's assistance will help alleviate the suffering of those affected by this terrible disaster.Our thoughts and prayers are with you and the Filipino people at this difficult time."Israel has frequently offered aid in the wake of disasters overseas, such as the earthquake in Haiti in January 2010 and an earthquake in Turkey in 2011.The IsraAID humanitarian organization also sent a team of seven medical professionals to Tacloban City in the storm-ravaged Philippines to provide critical health interventions in the affected region. IsraAID, too, will continue to assess needs in the field and offer aid accordingly, including trauma professionals and child protection specialists.

Israeli aid to Philippines in wake of typhoon

Medical facility set up in Bogo, in Cebu province

As of Sunday (November 17), the Israeli field hospital has treated close to 500 patients, including over 150 children. The name chosen by the grateful parents of the first baby born in the field hospital was "Israel".

Israeli aid to the people of Bogo, Philippines
Two Israeli planes carrying personnel and equipment brought a 150 member delegation as well as 100 tons of humanitarian and medical supplies were despatched to the Philippines to aid the people struck by Typhoon Haiyan (Yolanda). It was decided to locate the Israeli medical facility in Bogo, in the northern province of Cebu. While headlines have mostly focused on chaos in and around Tacloban City, the typhoon also left a trail of violent destruction on Cebu Island, where the most basic of necessities are lacking. Provincial officials say as many as 90 percent of buildings on the north of Cebu were badly damaged by winds and rain, which also flattened crops, downed power lines and blocked roads. Bogo is among the cities hardest hit by the typhoon in Cebu province. Bogo City Mayor Celestino Martinez Jr: "The typhoon destroyed everything we have here, from infrastructure to agriculture.”

Photos from the field hospital in Bogo

Details
Written by EUROPEAN UNION Delegation to the State of Israel
Published: 13 November 2013

"I want to thank the Director of the Ziv Medical Centre, Dr. Oscar Embon for this opportunity to see with my own eyes the wonderful treatment the hospital is providing to injured Syrians. I was deeply impressed by the dedication of the medical staff that is sparing no effort to provide the injured patients, many of them children, with the best possible medical care.

This commitment to the welfare of other human beings, regardless of the fact that they belong to an enemy nation, should be a source of pride to all Israelis.

We have all been horrified by the scale and intensity of the fighting in Syria.

The European Union has also mobilized to deal with the terrible humanitarian effects of the crisis. Just two weeks ago the EU allocated €85m for Syrian refugees bringing our total humanitarian support so far to €400m. About half of this sum will be spent inside Syria to help civil society groups provide basic services while the other half will be used to help Jordan cope with the 500,000 Syrian refugees on its territory."

.Canaanite fortress found in excavation in southern Israel
The fortress was built in a strategic location from which it is possible to watch the main road that went along the Guvrin river – a...
Read More...

X LAB DIAMONDS Promises to Revolutionize the Diamond Industry in Israel, with Top Quality Laboratory Diamonds
For centuries, diamonds have captured the eyes and minds of people around the world, and their value has reflected that special prominence....
Read More...